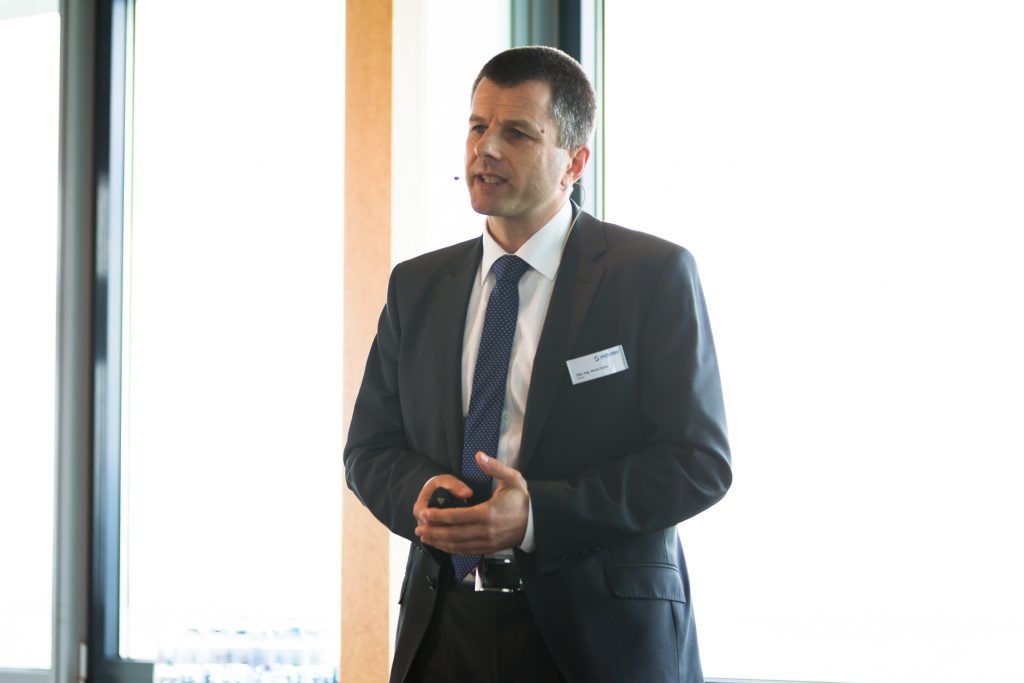 Energy Tomorrow 2016 was held on the premises of “Wolke 19” at Vienna’s Ares Tower under the heading “Energy Revolution – Quo vadis?”. The event was attended by more than 120 guests. “We are pleased that Energy Tomorrow has become a benchmark for exchanging ideas and networking,” said Karin Fuhrmann, tax adviser and partner at TPA and also the initiator of the industry-specific event for renewable energies.

Against the background of the UN Climate Change Conference, TPA addressed the latest developments on the energy market. International experts from the energy sector highlighted the current situation on the energy market from economic, fiscal and legal points of view and analysed the complex tension field.

Univ. Prof. Karl Rose, internationally renowned energy expert and Director of the World Energy Council, held the keynote speech titled “The United Nations Climate Change Conference in Paris and its impact on the energy policy and markets of the European Union”. Rose provided visitors with insights into the challenges and targets faced by the European Union in the near future, i.e. increasing energy efficiency and achieving the energy and climate targets proposed for 2030.

The EU intends to achieve 27% energy savings by higher efficiency on the energy market, while at the same time setting the greatest possible store on improving the security of energy supply. This includes the further development of renewable energies, sustainable production from fossil fuels, and even safe nuclear power where this option is chosen. It also includes more effective collaboration with current partners as well as building up new partners such as the countries of the Caspian Region. “However, the decision about the future of global energy policies will be made in Asia, for by 2040 India’s energy demand will have caught up with that of the United States,” Rose explained.

Rose specified a number of critical and important steps that have to be taken soon for the energy and climate targets of the European Union to be reached.

What is required, in his opinion, is, among others, a European energy union so that the challenges can be handled in a better way, also more investments in research and development, since they are too low as compared to the subsidies granted, and a re-thinking process among the population. “Systematic thinking is also necessary, but unfortunately not always available,” Rose added. When answering a critical question from the audience as to how we are supposed to achieve these targets, Rose said matter-of-factly: “We are going to achieve them – that is not the question! The question will be: how much are we going to suffer on our way towards achieving them.”

Alternative forms of energy in Central and South Eastern Europe

The economic and legal framework regarding various alternative forms of energy in Austria as well as in Central and South Eastern Europe were explained by experts from TPA and the Schönherr law firm. Wojciech Sztuba, partner at TPA Poland, provided the audience with an update of wind energy support schemes in Poland. In his presentation, Sztuba mentioned the prerequisites for the auction model and major problems associated with them; he pointed out a possible revision of the auction model and explained the new wind energy investment act that might be adopted as early as in April 2016.

Bernd Rajal, partner at Schönherr, put the focus of his presentation mainly on the current legislative EU framework regarding renewable energy and energy efficiency in Central and South Eastern Europe. Rajal outlined the statutory EU energy efficiency specifications with a particular focus on buildings. As buildings account for 40% of overall energy consumption, minimum efficiency requirements for buildings are a must, according to him. He expects problems to occur with regard to implementation of the energy efficiency act, as some EU countries (Romania, Slovakia, Czech Republic and Hungary) have not introduced any mandatory implementation schemes.

In his presentation titled “Energy efficiency – necessity or ‘nice to have’?”, Horst Dulle from the international consulting and engineering company Pöyry encouraged companies, investors and private individuals to ask themselves precisely this critical question with respect to future projects. He emphasized that the present energy price trends and lack of planning reliability in the industry have actually curbed incentives for efficiency measures. Subsidies are often not claimed to full extent, and “for as long as energy prices remain at such an extremely low level, there are no incentives for investment in energy efficiency measures, and the latter will be implemented only if required by law,” Dulle explained.

Best practice examples for energy efficiency in the field of model refurbishment in Austria were presented by Ingmar Höbarth, Managing Director of the Climate and Energy Fund, rounding off the multi-faceted and practice-minded programme of Energy Tomorrow. Höbarth illustrated the impact of climate change as well as the costs for the Austrian economy resulting from it. Similar to the previous speakers, he considered a change of paradigm in the existing consumer and behaviour patterns of companies, institutions and private individuals an absolute necessity.

Stay tuned – Energy Tomorrow 2023 is coming up with its’ 12th edition!